skip to main | skip to sidebar

Posted by madlibr at 3:54 PM No comments:

The Thirteenth Presentation of “Cat in the Hat” at Madison

Each year we hear the students attending saying, “This is the best year yet!”  It seemed to be the consensus of all involved at the 2015 annual event.  Students and adults were delighted with the new addition of the Farm Scene and Chicken Dance.
The event is co-sponsored by The Madison County Museum and the Madison Public Middle School.  Co-chairmen Sandy Maybon, Dawn Johnson, and Carol Robertson appreciated the excellent cooperation by volunteers and those attending.
Travis Jordon as the Grinch greeted each group and Dawn Johnson provided the wonderful cast of helpers and Seuss characters that made the day a success!  They are listed with the photo of the cast of characters and escorts for the day.
A new feature this year was the farm scene which Dawn Johnson, Breanna Johnson, and Tara Jordan shared with students.
Community volunteers Marilyn Moyer, Cindy Schmidt, Betty Geary and Sally Schroeter assisted with the day long event.
The guests were Amanda Sorensen and Jessica Ternus’ Madison Public Preschoolers; Reva Siegel and Joye Shaffer’s Madison Public Kindergartens; Jane Lafeur and Katie Eischeid’s Madison Public First Graders; Monette Osten and Teryn Rother’s Madison Public Second Graders; Annie Rumsey and Samantha Wietfeld’s Trinity Lutheran students; and Laura Sobotka and Tammi Janssen’s St. Leonard’s students.
After each group was finished visiting the twelve different activities they then released balloons with notes attached with names of the schools, classes and an email address to let participants know where the balloons had been found.
When launched, the balloons all seemed to be headed in a northeasterly direction, so everyone was surprised to receive an email indicating that one had been found the same day of the “Cat in the Hat” event in Omaha, Nebraska.  Greg Rieger had found the balloon and sent a picture with the following caption:  “Hello, Mrs. Osten’s second-grade class!  Greetings from the Benson neighborhood in Omaha, NE!  We are Greg and Reiko.”  “I found your tag today about 5:30 as I came home from work.  That must have been some kind of super-express east wind!”  “It sounds like you have a fun class and teachers!  Students, make sure you pay attention to them!”
“Cat in the Hat” is presented the first part of March near or on the birthday of Dr. Seuss who introduced “Cat in the Hat” sixty-one years ago to readers.  Using only two hundred thirty-six different words, Theodor Seuss Geisel changed the way American children learned to read.  The Seuss books were designed to catch the reader’s attention and imagination stimulating the desire to read the intriguing adventures Seuss created.  In one month 200,000 copies of “The Cat in the Hat” had sold.  By the end of 1960, sales had hit two million.  Since then, many Seuss books have been written and are still a favorite of readers of all ages.  The Seuss books are now on display as a temporary exhibit at the Madison County Museum in Madison.
This fun reading experience in Madison actually began to encourage more reading activity by people of all ages and also to draw attention to the fact that Madison is one of the few communities with a Carnegie Library on its original location.  Many people in Madison still recall fond memories of going to that library in years past.  If you have an interest in the future of this building, please contact the Madison County Museum at 402-992-1221.
Posted by madlibr at 3:57 PM No comments:

The SCIENCE EXPO in October was a great learning experience for all ages involved.
Over 600 area students attended the event!


Posted by Audrey Loosvelt at 9:22 PM No comments:

The seventh annual event hosted by the Madison County Museum and Madison Public Library was held Thursday, October 3.  What started in 2007 as a Book Banquet has now evolved into a Science Expo with emphasis on  the importance of developing scientific hands-on experiences and good reading habits for students.
Five hundred fifty-nine students, thirty-three teachers and seventy parents and teacher assistants from ten schools participated.  They included all three Madison schools and schools from Atkinson, Battle Creek, Clarkson, Lindsay, Norfolk, Neligh/Oakdale, and Tilden.Forty-two Madison residents volunteered with various events which included a Teddy Bear Clinic, Planetarium, Science Investigations with the Madison Sheriff Office, Wildlife Encounters, the Pierson Wildlife mobile display and sixteen areas in the City Auditorium providing students with other opportunities to interact with a variety of science experiences as well as view scientific posters from the Madison Middle School science department.
These science opportunities included bees, health care, entomology, wildlife, dinosaur dig, panning for gold, horticulture, dairy, electricity, minerals and fossils, and culminated in viewing the 30’x50’ running “H-O” scale trains in the west museum building.
Each school received books so that students each had their very own book to enjoy as a part of the busy day in Madison, Nebraska.


Everyone appreciates the wonderful assistance from our volunteers and the City of Madison in helping make this day a success.  Even the weather (a very important part of our science) cooperated!
Posted by Audrey Loosvelt at 8:49 AM No comments:

Posted by Audrey Loosvelt at 1:26 PM No comments:

Here are some photos of the Science Expo!


Posted by Audrey Loosvelt at 10:23 AM No comments: 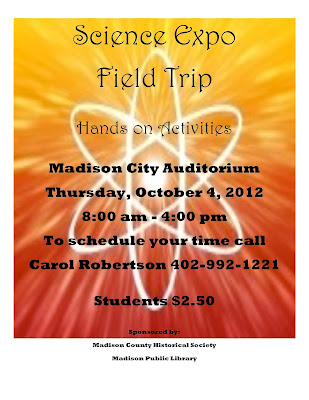 Posted by Audrey Loosvelt at 9:23 AM No comments: